SSD vs. HDD: Which is a better choice? 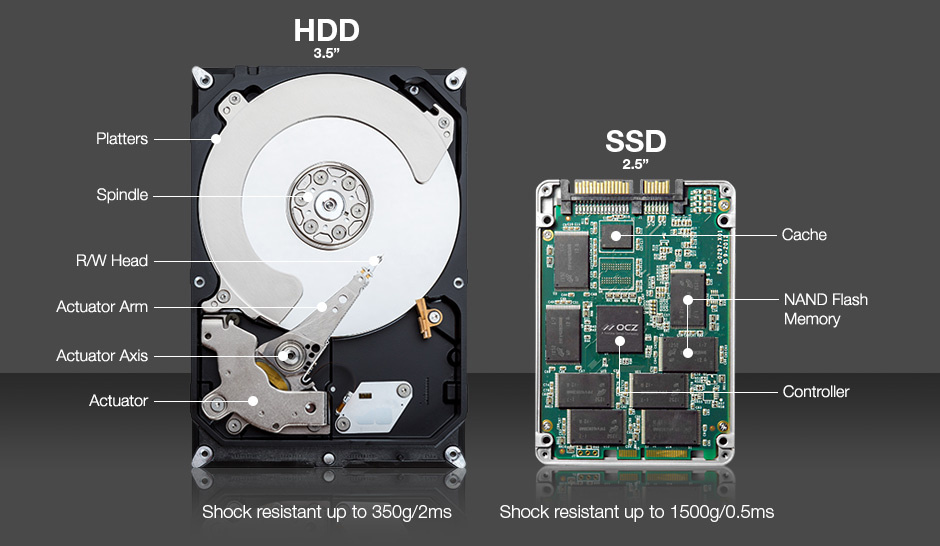 Are you running out of storage space for your important personal data? Or perhaps your old disk is giving you a hard time by being super slow? Well, either way, it’s time for a hardware upgrade. You can opt-in for the traditional hard disk drive or choose the faster solid state drive. In this article, we will discuss the major differences between SSD vs. HDD, and find out whether hard drives are still relevant or you need to up your game.

The hard disk drive, or HDD, has been around for half a century. These traditional disks have been continuously increasing their storage capacity and decreasing in physical size over the years. They mainly rely on spinning platters, or discs, to store and produce the data. Those platters are coated with a ferromagnetic compound, and use magnetism to represent the data. The hard drive contains both mechanical and electrical parts.

The solid state drive, or SSD, on the other hand, uses flash memory to read or write data. Unlike the HDD, an SSD doesn’t have any moving parts. A recent research by SNIA (Europe) suggests that solid state drives contribute to reducing energy costs and support data centers. This is mainly because SSDs produce less heat. Those drives use semiconductor chips (primarily a series of NAND chips) to store data, which retains their charge without requiring an additional power source

Pros and Cons of Hard Drives

Some of the main features of hard disk drives include:

Another point worth mentioning: as of today, some of the more advanced SSDs are encrypted by default. It means that often, those drives are deemed unrecoverable due to the advanced encryption algorithms embedded in them.

Slower than SSD: While hard drives offer capacity range from 40GB to 12TB for private or commercial purposes (and even higher for enterprises), they lack the speed SSD drives have.

A hard drive offers a speed of about 100 MB/s for reading/writing data, much slower than an average SSD. SSDs have been much faster since they use flash memory. You can achieve about 200-550 MB/s speed from an SSD while hard drives work at about 7,200 RPM, which is about 80-160 MB/s.

An SSD, being the latest technology, brings much more in the offering. Earlier SSDs used to come with the SATA II bus, but now they also offer SATA III, which allows users to make speedy sequential transfers.

Moving Parts: Hard drives primarily rely on moving parts, which are prone to suffer from failures. If you drop your SSD, chances are it won’t even notice it. If you drop your HDD, it can suffer extensive damage to its mechanical components.

Higher Power Consumption and Heat Production: While modern devices like the SSD use semiconductor chips to retain their charge, hard drives have more substantial power consumption and produce more heat while operating.

Why are Hard Drives Still Around?

Cost: Hard drives are cheaper than solid state drives and come with massive storage capacity. You can get a 1TB HDD for half the cost of an equivalent SSD.

Performance: Although the read function of SSDs offer high speed due to the usage of flash chips, at the same time their write performance is slower due to the need to erase the blocks before reusing them, a process often referred to as “erase latency.”

Moreover, there are some limitations to the durability of SSDs. A single block of a flash chip cannot be written more than 10,000-100,000 times. Contrary to hard drives, these small-block writings have a direct impact on the lifetime of entire flash chips.

Should I Get an HDD or SSD?

If you are looking for speed and durability and less bothered with pricing, SSD is the way to go. Faster boot times, not prone to physical damage and speedy file transfers—those are your essential elements.

If you are a gamer looking for higher storage, an enterprise looking for better space to store data or a home user looking to back up your photo collection while not emptying your pockets, the solution for you is a hard drive.

One last tip when choosing your hard drive: nowadays, the choice is minimal. A decade ago, we had lots of players on the market—companies like Maxtor, Quantum, IBM, HP, Fujitsu, and many others. Through a series of mergers and bankruptcies, we are left today with four leading players: Western Digital, Seagate, Hitachi, and Toshiba.

When coming to purchase a new series of hard drives for our clients, we always check the stats published by BackBlaze—a storage provider who uses thousands of hard drives annually. Every quarter they publish a report outlining the vendors and models they used and their AFR— Annual Failure Rate. By looking at the report, you can quickly determine which vendors are more reliable in the long term.